Mistresses were an integral part of many powerful unions. For most of recorded history, marriage was all business. Physical and emotional fulfillment could be happy accidents, but they were certainly not prerequisites for wedlock. For such things, a man (and it was mostly men, sorry) had to step outside the bounds of holy matrimony.

And if the partners were high-profile, such extramarital risky business could often shape the face of international politics and culture. Some pages in the book of history were written by characters engaged in some extremely bad behavior. Below are some truly spicy and fun facts about women from the “wrong” side of the bed sheets.

Anne Boleyn was born in what is now Norfolk, England in 1501. She was the second Queen of King Henry VIII and was infamously beheaded on charges of witchcraft—but before that, she was King Henry’s illicit mistress.

The most famous quote by Anne Boleyn was spoken just prior to her execution. She reportedly was chatting with someone about her executioner and, in attempt to reassure her friend, said “I hear he’s quite good. And I have a very small neck!”

King Henry VIII’s interest in Anne Boleyn was controversial, and not just because he was already married. Henry was already having an affair with Anne’s older sister, Mary. There were also rumors that her mother Elizabeth Howard had also been bedded by the King. Despite public accusations claiming the affair, the King denied it, stating “never with the mother” when challenged.

While this seems to let Elizabeth off the hook, it also more-or-less confirms Henry’s affair with Mary Boleyn.

Anne Boleyn showed no lack of disdain for her predecessor, Catherine of Aragon. She refused to attend Catherine’s funeral, prevented Catherine’s daughter Mary from attending, and spent the day parading around the castle in bright yellow. Rumors spread that Anne had threatened to murder Catherine and Mary, and Catherine’s death led many to suggest that Anne had finally made good on her threat.

When Henry started pursuing Anne, she refused his advances. Although the true reason was most likely that she was still heartbroken over her broken engagement to Henry Percy, the king saw her lack of interest as a challenge and gave chase. Eventually, the sport turned into genuine attraction, and he tried again to appeal to her by offering to make her his official mistress, but she refused him again.

Finally, he proposed marriage to her, and this was an offer she couldn’t refuse.

Anne’s failure to provide Henry with a male heir led to her being pushed aside for Jane Seymour. Anne miscarried twice during their marriage, with the second appearing to have been a boy.

Anne Boleyn was never described in history as being classically beautiful. She had a dark complexion and black hair, which made her stand out in a culture where milk-white paleness was seen as the epitome of beauty. Her most striking feature was her eyes which, according to one contemporary, were “black and beautiful.”

Anne Boleyn is also notable for being the first Queen of England to be publicly executed. Once found guilty, she was originally sentenced to burn, but Henry changed it from burning to beheading. He called in an expert swordsman from France to carry out the execution instead of using the typical axeman.

Henry VIII’s thirst for sons made him infamous. But few people know that he already had a son for most of his early reign—thanks to his lover, Bessie Blount. Henry Fitzroy was the only acknowledged illegitimate child of Henry VIII, although the boy died at the age of 17. Blount would still be greeted with the refrain, ‘Bless ye, Bessie Blount” for that proving the Henry VIII could produce male babies.

What do you think of, when you think of a Pope? Flowing white robes? Check. Very impressive hat? Check. Renowned lover… Wait, what? In the 15th-century, courtier Giulia Farnese acted as mistress to Pope Alexander VI. Her nickname in Italian was “Giulia la bella”… which means Julia the Beautiful. Suffice to say, she was quite the stunner.

She also holds a pretty, uh, surprising distinction: to date, Farnese is the only woman to have (publicly) mothered an illegitimate child with a Pope while he served his pontificate.

The future King Peter I of Portugal was deeply in love with Inês de Castro, to the point where he neglected his own wife and endangered the international alliance. Infuriated, Peter’s father sent three men to decapitate Inês. In revenge, the heartbroken Peter found two of her killers and had their hearts viciously ripped from their bodies.

He then exhumed his wife’s body, placed her on a throne, and forced his entire kingdom to bow before her corpse and kiss her hand. Creepy, but touching!

Eleanor de Guzmán was the lifelong mistress of Alfonso XI of Castile. Together, she and Alfonso shared 10 children and a prosperous partnership. So far so good, right? It was…until the king passed. After his death, the Queen had Eleanor executed within a year. Apparently, she was just biding her time. Remember: adultery just doesn’t pay.

Agnes Bernauer was a beloved 15th-century paramour to Albert III, the future Duke of Bavaria. These feelings were not hereditary, as Albert’s father absolutely hated Agnes. Threatened by her vast influence, the Duke Sr. tragically drowned Agnes in the Danube River. Fears of civil war between father and son never materialized, because Alfred soon ascended to the throne.

To commemorate his lost love, Albert quickly endowed a yearly memorial celebration at the “Straubing Carmelite Cloister” to commemorate Agnes.

By far the most powerful harem mistress in history was Kösem Sultan. After the death of Ahmed I’s mother, the Greek-born slave concubine rose to become the chief consort of Ahmed I when she and her “husband” were barely 15. Kösem was regent to her young sons, Murad IV and Ibrahim I, and her grandson, Mehmed IV.

She lived to be about 62—her career in politics spanned over 40 years and she was mourned as “Vālide-i Maḳtūle” (murdered mother) when she died, assassinated by the mother of Sultan Mehmed IV in yet more intrigue.

Despite being 20 years his senior, legendary mistress Diane de Poitiers kept the interests of King Henri II of France for as long as the king lived. It was only rumored that Poitiers drank liquid gold to maintain her legendary looks. However, in 2009, French scientists examined Poitiers’s corpse and found that her hair contained gold levels at 500 times the human average.

It’s said that King Henri II’s wife Catherine de Medici bored peep holes into the roof of Diane de Poitiers’s bedchamber so that she could see her husband “in action” with his mistress. She apparently noted the contrast between the disinterested performance she got from Henri versus the “spectacle” he gave Diane…

17. Our Lady of Vindication

Catherine was cordial to her husband’s mistress… during his lifetime. As Henri lay dying from a jousting accident, her true feelings revealed themselves. Catherine denied Diane de Poitiers any access to Henri’s deathbed, ignoring her husband’s final pleas for his lover. After his death, she banished Poitiers and her friends from Paris.

She also ordered the surrender of Poitiers’s crown jewels and her fine castle, the Château de Chenonceau. Even years later, Catherine made her real opinion heard on Poitiers in a letter to one of her children which read, “Never has a woman who loved her husband liked his whore.” Something to keep in mind, fellow ladies.

When it comes to historic “Other Women,” few would beat the feats of Madame de Montespan, the most famous mistress of the “Sun King,” Louis XIV of France. To many of his subjects, she was considered “true Queen of France” for her terrifying power over the king’s heart and court. It was Montespan, not the king’s wife, who set the artistic and political tone for the historic Palace of Versailles.

Montespan was no upstart. She was born on October 5, 1640 to one of the most ancient noble families in France, the House of Rochechouart. As the king’s mistress, her legitimized children with him would go on themselves to found royal houses in Spain, Italy, Bulgaria, and Portugal.

20. Call Me by My Adopted Name

The woman who would be “Madame de Montespan” was simply born “Françoise.” Later in life, she adopted “Athénaïs” as a second name. In doing so, she was paid homage the current literary fashion of “les style précieuses,”which celebrated witty women and novelistic flourish.

At the age of 23, Françoise-Athenais finally became “Montespan.” She married Louis Henri de Paradaillan de Gondrin, the Marquis of Montespan. Together they had just two children: Marie-Christine, who tragically died at the young age of 11 or 12, and Louis-Antoine, who lived and got along with his mother’s second family. 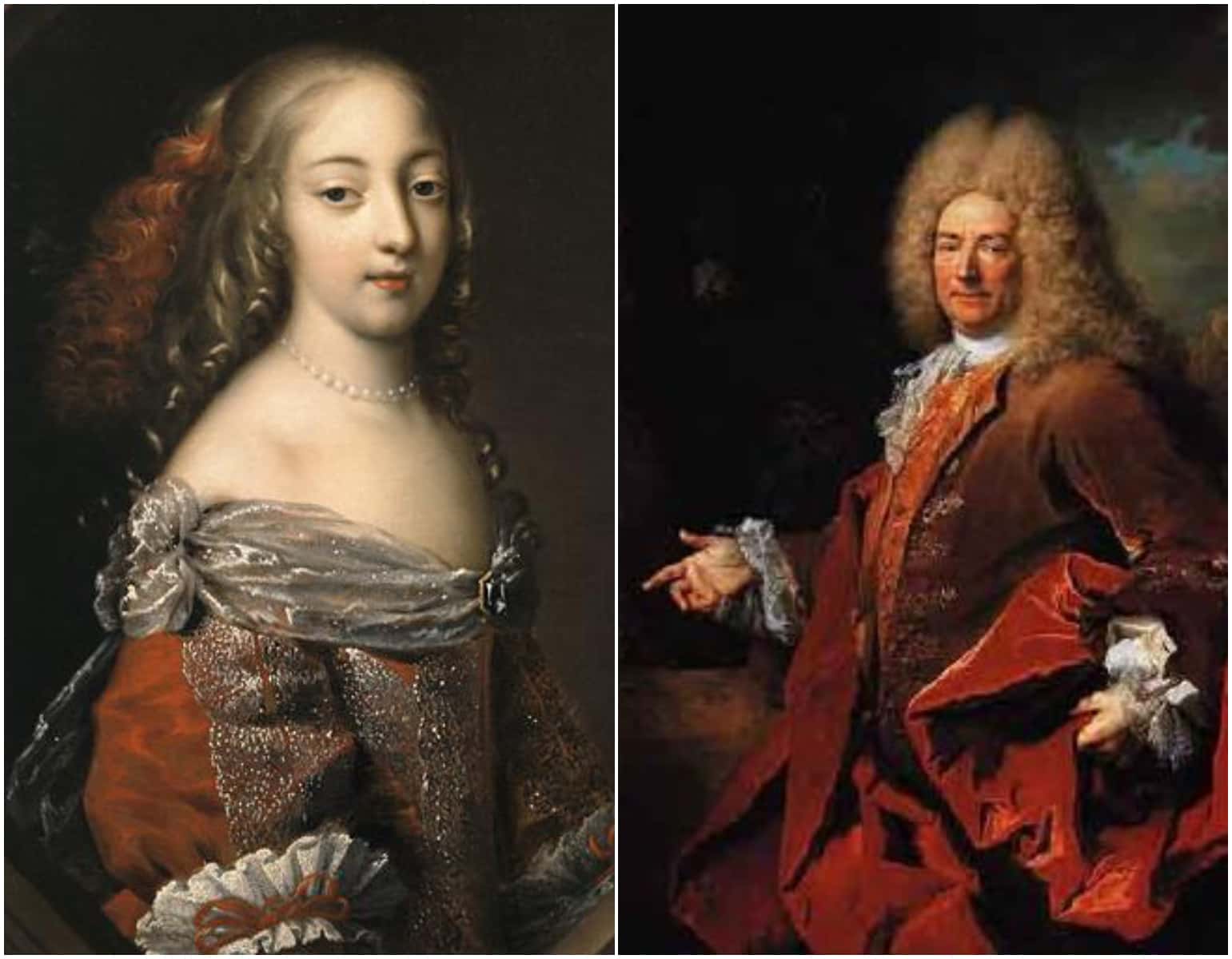 Like many things that were to come in her love life, Montespan’s wedding was hardly fairytale perfect. For one, the couple had forgotten to bring the traditional kneeling cushions upon which they would bend down and take their vows. To improvise, the bride and groom knelt upon cushions reserved for dogs. Hey, if it’s good enough for Fido…